Having a sick baby is no fun at all. And, the minute a cough is accompanied by a fever, you’re likely to move swiftly from concern into panic. But first you need to diagnose that fever with a baby thermometer.

There are a few things you need to know before starting the search for the best baby thermometer.

The American Academy of Pediatrics only recommends the use of rectal thermometers for children under 3 months. The primary reason is that rectal thermometers provide the most accurate readings and any fever in infants younger than three months is a matter for your pediatrician.

There is some evidence to support a move towards temporal thermometers (such as our top Fave). But, in the first few months, stick to the rectal version.

If you need help using a thermometer – after choosing one from our list formed after extensive research and the responses of real users – this guide from the American Academy of Pediatrics is wonderfully helpful.

And now, on to our list of the best baby thermometers.

Our editors independently research, test, and recommend the best products; you can learn more about our review process here. We may receive commissions on purchases made from our chosen links. 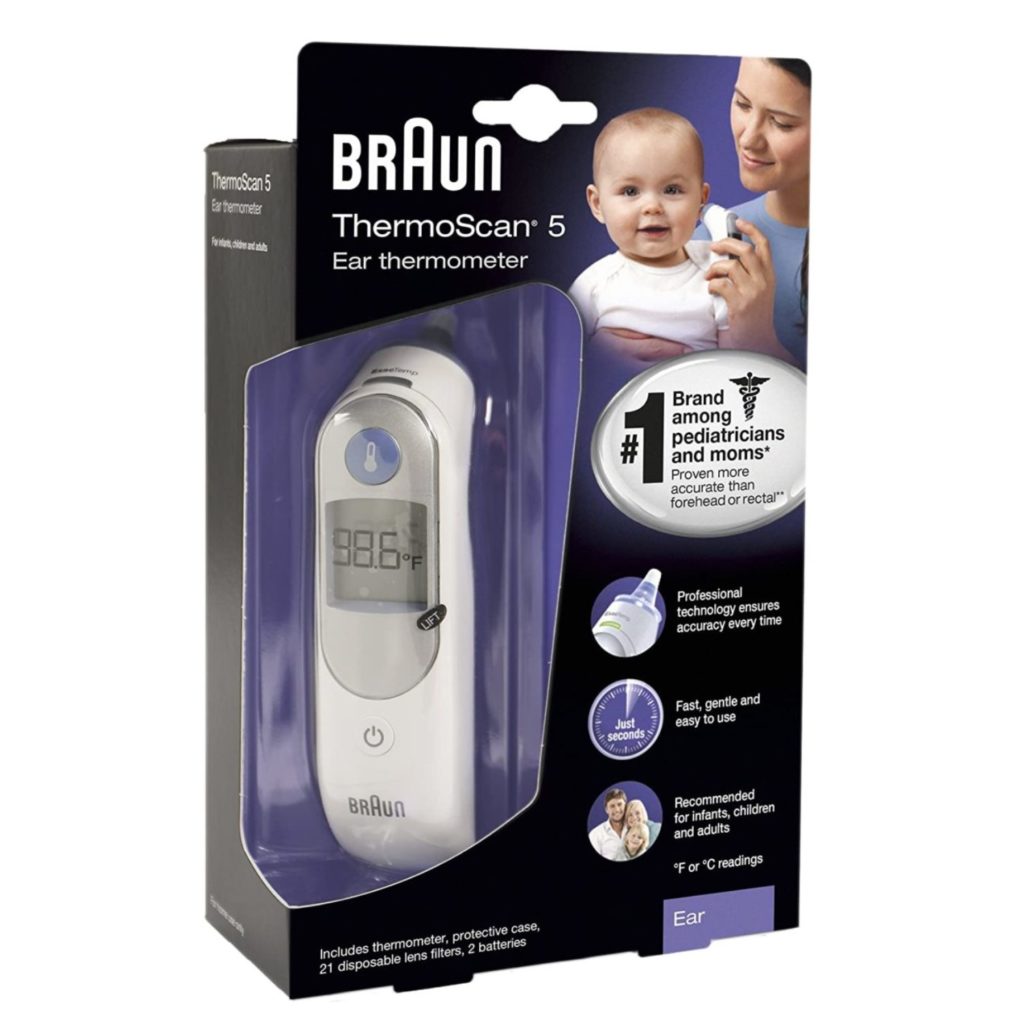 The pre-warmed tip offers faster accuracy and the memory function provides the last recorded temperature. Smarter than many thermometers, this one tells you if it’s positioned correctly.

Some users find the temperature reading isn’t as consistent as they would like.

This is a top-rated and well-respected baby thermometer across the globe. Now, it’s not a Smart gadget, but we’re not sure it needs to be. The features it does have, this thermometer excels at – and there are a few of those. Our favorite may be the positioning system, but we’re also fans of the reading tip covers that stop the spread of germs. Given the price, we think you really should take a look at this thermometer now.

Age recommendation: Anyone from infants to adults – go for it!

Reading time: You can expect a reading in seconds, which is really useful for squirmy babies and worried parents.

Cleaning instructions: To prevent scratching of the reading tip, this Braun thermometer works with “lens filters” – little caps to place on the tip before each use. As you would expect, this helps with the cleaning process as the thermometer itself doesn’t touch the person itself. You should, obviously, wipe the body of the thermometer after every use and many still recommend an alcohol swab.

Getting an accurate reading: A terrific feature of this thermometer is the ExacTemp system. Using sounds and lights, it helps guide you into the correct position for the most accurate reading. That goes hand in hand with the high rating results on independent consumer organization tests and the international awards this company consistently receives.

Other features: We appreciate the memory function that pulls up the last temperature reading. This is truly helpful when trying to track a fever or illness over the course of a day.

Will it break the bank? The thermometer itself has a MSRP of $50, though you are likely to find it for less. It comes with 21 lens filters and a protective case. Now, you will need to keep a supply of those lens filters on hand, but you can pick up a 40 pack for less than $10 (often, much less than $10). 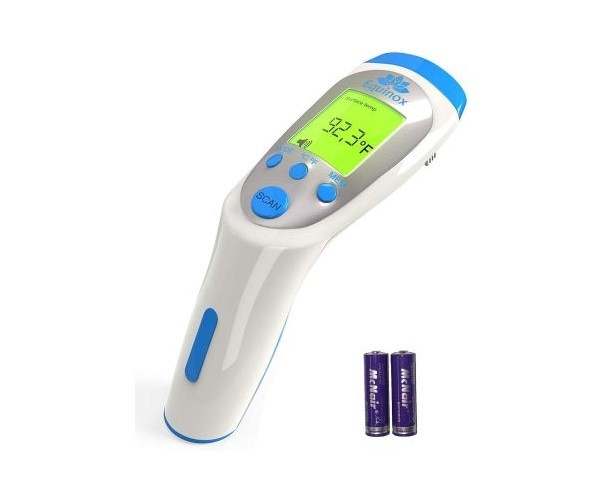 You do need to ensure it’s angled correctly.

This thermometer might be everything you’ve ever wanted. The built in memory holds 32 recordings which makes it easy to keep track of temperatures during protracted illnesses – or just because you’re organized like that. This is a big plus; another is the contactless readings you receive instantly on the super clear LCD screen. It is on the expensive side, but the benefits make it easy to use – even when trying to read the temperature of newborns.

Type of thermometer: This is a contactless, infrared thermometer that reads the forehead or body. However, there are ear and forehead options available too.

Age recommendation: This works for all ages, from birth onwards.

Reading time: You’ll get an instant reading. (We’ll get to the accuracy of instant in a moment.)

Cleaning instructions: This is contactless, but you know you need to clean it every time you handle it. That’s just best practice for good health. If you order the ear thermometer, you will obviously need to go the extra mile.

Getting an accurate reading: You’ll need to use the instruction guide to ensure you take the reading from the right distance. That’s a little bit of a hassle. But, the closer you are to the “precise” point, the more accurate the reading will be. It may take a bit of finesse to get it right, but you don’t need to touch this thermometer to the body, so you can play with it out of the box.

Smart features: You’ll want to download the Pyle Health app to work the Smart features of this thermometer. It connects via Bluetooth automatically – no need to manually pair the devices. There is a calendar function on the app – and the ability to share with family or doctors. Plus, the last 50 readings are easy to access.

Will it break the bank? The MSRP is almost $40, but you’ll pay closer to $30 if you can find it on sale. This has a very reasonable price point considering the features it comes with. 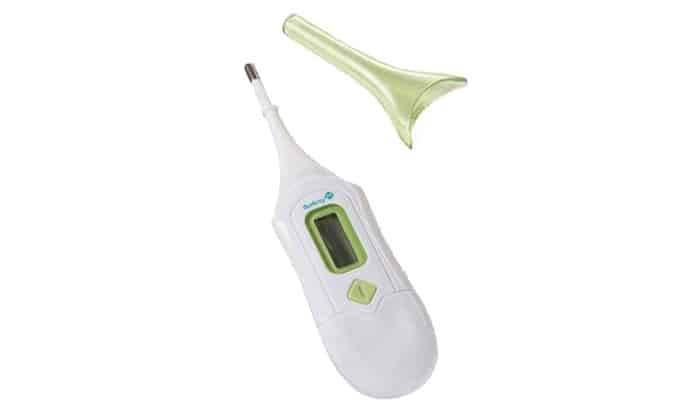 You’ll get a reading in 8 seconds and a beep to let you know it’s complete. Uses a replaceable button battery and has an over-insertion guard.

The included battery isn’t great – and you’ll need to check this thermometer to make sure it works before you need it in an emergency.

This is a basic rectal thermometer (which is the recommended format for infants) and easily the best budget option on the market. There aren’t many bells and whistles, but it does the job well. Wait, we want to clarify that. As long as the battery is fresh, it works amazingly. But, with an old or failing battery, this baby thermometer is difficult to work with. If you’re a new parent or parent-to-be, we suggest getting this early and checking the battery as soon as possible.

Age recommendation: It’s best for infants between 0 and 3 months of age.

Power source: A watch battery. Some users have reported issues with the included battery. However, you can replace it. That said, you’ll (hopefully) use this thermometer rarely.

Reading time: The manufacturer reports an accurate temperature within 8 seconds. Some users have gotten readings within 3 seconds. But, some also report it taking a little longer.

Cleaning instructions: You’ll need to give this a good clean after every use. It is, after all, a rectal thermometer. Once you’ve cleaned and dried it, you can replace the tip cover so it’s ready to use the next time.

Getting an accurate reading: As much as rectal thermometers creep some people out, they are the most accurate for taking the temperature of children between birth and three months of age. Indeed, they’re likely to be the best for children up to three, according to the American Academy of Pediatrics. So, even though this is a basic model, it’s much more accurate than forehead, ear, or oral thermometers.

Smart features: No. But, you didn’t expect any, did you?

Other features: In addition to the over-insertion guard, this rectal thermometer also recalls the last reading. You know, just in case you forgot to write it down for the doc.

Will it break the bank? At less than $6, you really can’t go wrong. You may need to replace the battery, but that shouldn’t break you either. 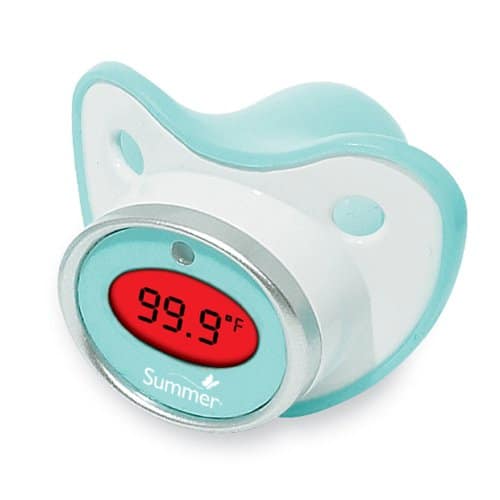 This oral thermometer offers a glow feature and beeps when the reading is complete. There’s a memory feature and a protective cover is included.

It’s not the fastest thermometer, which can make it difficult to take the temperature of fussy kids.

This is a big step up from the oral thermometers from the past, but it’s not always the best way to check your child’s temperature. If you have an infant, you really do want to follow medical advice and choose a rectal thermometer. But, this does work for children that find pacifiers soothing – as long as they keep it in their mouth. It doesn’t have a lot of features, but it is less than $10.

Age recommendation: It’s probably not the best for small babies, as it’s a large pacifier. And, of course, it’s not the sort of thermometer you can use for years.

Power source: There’s an alkaline battery included, but you can’t change it. You will need to replace it if the battery dies.

Reading time: It’s not the fastest, so you’ll need to be prepared to wait up to a minute. It’s likely to be less, but it’s definitely not instant.

Cleaning instructions: The manufacturer suggests running it under water. We think it’s better if you try to clean and sterilize as you would a bottle. That’s not the easiest, but it’s worth it to protect your child’s health.

Getting an accurate reading: If your child is comfortable with this pacifier in his mouth, you’ll get an accurate reading. But, if your babe is fussy (which isn’t unusual during an illness), it’s not going to be your best friend.

Smart features: None. But, you didn’t expect it, did you?

Other features: You can use this to read temperatures in both F and C, and it switches off automatically to save the battery. Plus, it remembers the last reading. None of these are mind blowing features, but look at the price.

Will it break the bank? This will set you back less than $10. And, it’s the sort of thing that makes many babies comfortable, so you may want to buy it to take with you on vacations. 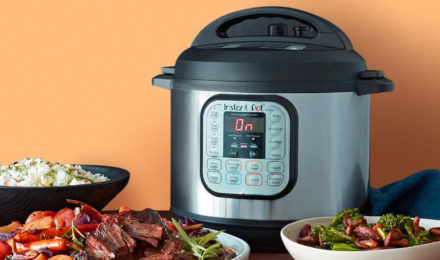 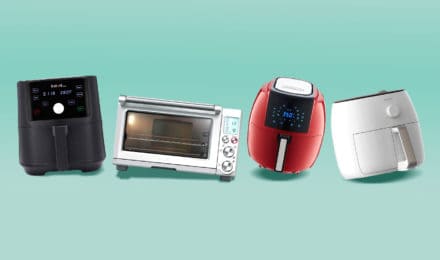 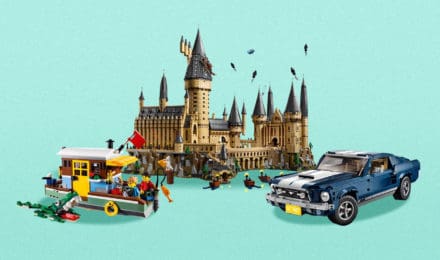 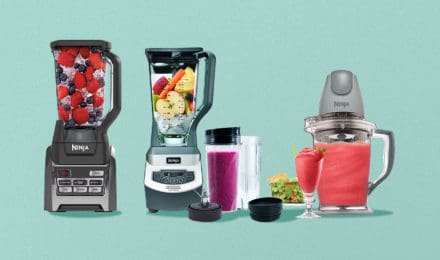 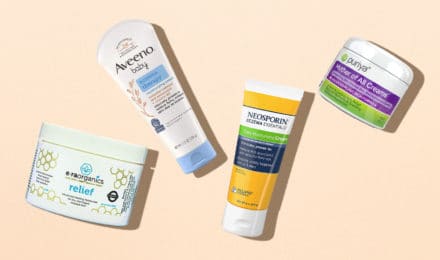 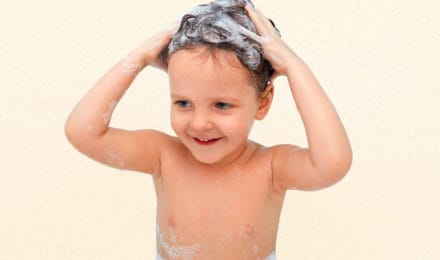